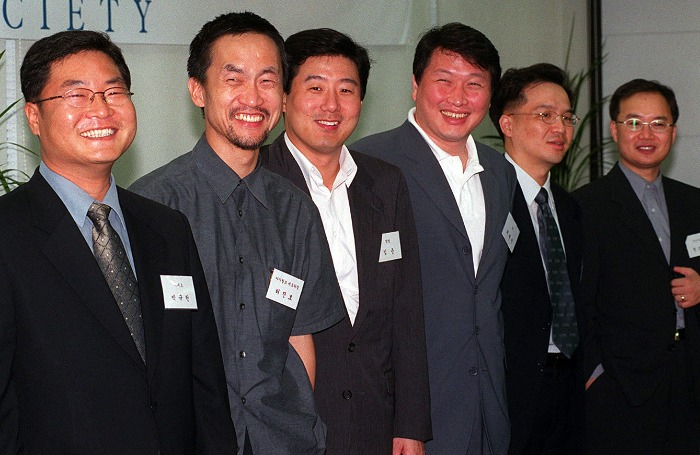 Back in August 2000, a fraternity of domestic business magnates’ children and startup entrepreneurs named V-Society was founded.

The fraternity was not a private social gathering but an official entity for startup investment and information sharing.

SK Inc. Chairman and CEO Chey Tae-won led the initiative, with Lotte Corp. Chairman Shin Dong-bin, and Kolon Corp. Chairman Lee Woong-yeol participating as well, to name a few. All the participants were viewed as the next-generation leaders in South Korea’s conglomerate ecosystem.

Industry insiders say the grandchildren and great-grandchildren of the conglomerate founders are playing even bigger roles in the startup arena than their parents. While some are in charge of managing the groups’ investment arms, others are working as venture capitalists out on the fields.

The heirs of South Korea’s family conglomerates, or chaebol, taking a keen interest in developing new businesses, which began two decades ago, is still a growing trend.

“Investing in research and development (R&D) and expanding facilities are no longer enough to catch up to the technological developments,” a corporate venture capitalist told The Korea Economic Daily. “This is why conglomerates and small and mid-sized enterprises alike are turning to startup investment instead.”

Huh Tae-hong, the great-grandson of GS Holdings founder, launched the CVC in 2020.

Chey Tae-won’s second daughter Chey Min-jung, who is leading the merger and acquisition (M&A) project at SK Hynix Inc., is a well-known expert in the startup ecosystem.

Ms. Chey is a founding member of online shopping mall Panda Korea Dotcom and is currently serving as a part-time advisor to a San Francisco-based remote clinical service provider.

Since last year, the younger Kim has served as head of Kiwoom Private Equity.

The third- and fourth-generation leaders of conglomerates’ founders are leading the groups’ digital transformation.

Most of the chaebol heirs are educated abroad, especially at prestigious universities in the United States, and utilize such networks for startup sourcing.

Moon Kyu-young is chairman of privately held Aju Group since 2004.

His first son Yoon-whe Leo Moon received his bachelor’s degree in hotel management from Cornell University and launched a CVC called Venture Studio within the group.

By investing in a shared-office startup Sparkplus Co., Moon raked in a profit margin of more than 10 times even during the economic downturn caused by the COVID-19 outbreak.

Traditionally, the children of conglomerate founders went through training in the respective groups’ financial and planning divisions.

But the grandchildren and great-grandchildren of these founders, who grew up in the West and studied in bustling metropolises abroad, have witnessed explosive growth in the mobile device sectors around the year 2010 and the ongoing Web 3.0 development in recent years.

“One of the reasons why the business groups’ heirs are bullish on investing in startups is because they are often in close communication with young entrepreneurs, founders of tech startups, and investment specialists,” a VC firm’s managing partner said.

The grandchildren and great-grandchildren of the business magnates have expansive networks, thanks to their studying and working abroad, and therefore strong in the so-called deal sourcing beyond the Korean peninsula.

Chung founded the Singapore-based company in 2020.

A VC industry insider echoed his industry counterpart’s view that the conglomerates are eager to find new growth engines from outside the group as opposed to the old practice of developing them in-house.

But the venture capitalist cautioned “Because investing in startups are high in risk, it behooves the conglomerates to be cautious against wanting to show tangible results in a speedy manner.”

In general, VC funds invest actively for three to four years in a startup and are locked in for about seven to 10 years.

Updated with details on the great-grandchildren of conglomerate founders’ upbringings.