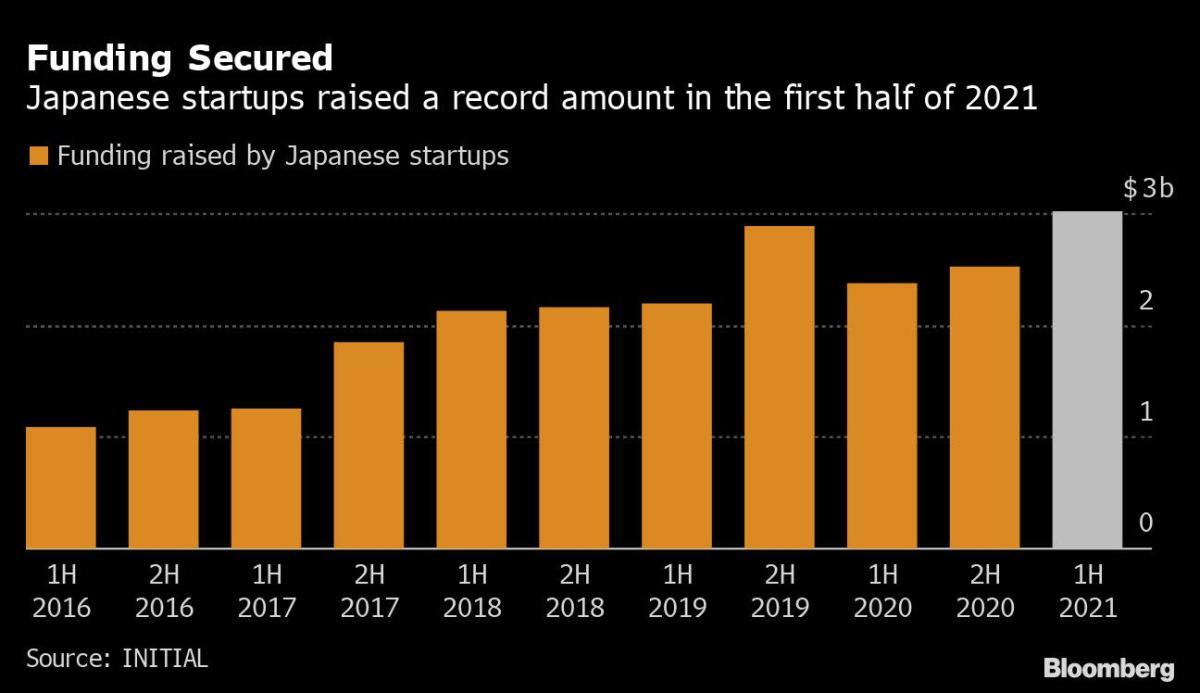 (Bloomberg) — Japan’s startups are attracting increasing interest from overseas investors as the country starts to shake off a reputation as a unicorn-free venture backwater.

Most Read from Bloomberg

More than $3 billion was raised in the first six months of 2021 alone, triple the amount in the same period five years earlier, according to local data tracker Initial. That’s being driven by growing interest from foreign investors with deep pockets, including Sequoia, Soros Capital and Peter Thiel’s Founders Fund — as well as Masayoshi Son, whose Vision Fund this year took stakes in Japanese startups for the first time.

One factor leading venture firms to seek opportunities in Japan and elsewhere is the crackdown in China’s tech sector. Investors including Son have said the pandemic has in some ways been a boon, with Zoom meetings replacing face-to-face bonding sessions and making a startup’s physical location less relevant. The interest is leading some to talk of an inflection point in Japan’s burgeoning startup scene.

“Historically they would ignore Japan and wouldn’t even give me the time of day,” James Riney, founding partner and chief executive officer of Coral Capital, a Tokyo-based seed-stage venture capital firm, said of large overseas investors. Now, he says, “there’s a lot more interest in Japan as a startup market.”

PayPal Holdings Inc.‘s $2.6 billion acquisition of Tokyo-based “buy now, pay later” Paidy Inc. in September underscores the opportunities available for Japanese startups and their investors. Tybourne Capital Management is said to have quadrupled its investment in Paidy in just two years, with an early investor making a 65 times return.

Even SoftBank Group Corp. founder Son, who has long been skeptical of Japanese companies, has begun to change his mind. Even as recently as 2019, he was assailing the country’s businessmen as unambitious “herbivores.” But with his bets in China souring, Son has joined the throng of investors seeking to diversify their investments more globally.

“It’s very unfortunate that there have been so few Japanese companies among the 3,000 we’ve looked at,” Son said at a November earnings briefing. “I want to increase our investments in Japan.”

Despite being on track for a record year of funding, the amount raised in Japan remains just a fraction of the $288 billion tally globally in the first half of 2021, according to Crunchbase. Closing the gap with the U.S. is one of the goals of Japan’s new Prime Minister Fumio Kishida, who has thrown his weight behind the startup scene.

A Kishida-appointed group of business leaders and academics has called for measures to support new companies. “While in the U.S., startups get investment based on expectations of future growth, in Japan the demand for short-term profit makes it difficult for startups to invest in growing their business,” the panel said in a November report.

“The notion of what an elite path is in Japan is changing much more rapidly than people understand,” McInerney said.

While Japan could claim only one startup valued at $1 billion in 2016, according to CB Insights, it’s now home to six, including the likes of Carlyle Group Inc.-backed synthetic biomaterials firm Spiber Inc. and artificial-intelligence developer Preferred Networks Inc., the country’s most valuable private startup.

Others note that the country actually has far more startups valued in excess of $1 billion than many realize. These “hidden unicorns,” as Riney and McInerney have described them, often attain that value shortly after going public.

“If you count all the companies that have existed for less than 10 years, who went public and are valued over $1 billion, then you’ll see a lot more” unicorns, said Soichiro Swimmy Minami, the founder of Visional Inc. Along with the likes of Money Forward Inc. and Freee K.K., Visional is a tech venture that’s gone to the public markets in recent years and seen its value exceed $1 billion.

Minami said it’s “kind of unfair” to compare the number of private unicorns in Japan with those overseas, considering how easy it is to list in Japan. Companies can go public on the Mothers startup board at a market value of just $4.4 million. A record number of firms are listing in December, mostly at small valuations.

“A lot of companies at that later stage need capital but because there’s actually not that many VC or investors willing to provide capital at that later stage, they get very tempted to go public,” Kathy Matsui, former vice chair of Goldman Sachs Japan, and now general partner at MPower Partners, said at an event this week. “Oftentimes they go public prematurely.”

The Mothers index of emerging stocks is down 16% in 2021 versus an 21% gain for the Nasdaq. Even that exaggerates the performance, with the index dominated by flea-market app operator Mercari Inc., perhaps Japan’s most successful startup. It accounts for almost 14% of Mothers and is up 35% this year.

Trading now at a value of more than $9 billion, Mercari is a rare example of a Japanese startup that has succeeded in the U.S., where it buys ads during the Super Bowl. The firm got around 17% of revenue from the U.S. in its last fiscal year.

Even so, the biggest Japanese startups still pale in comparison to peers abroad. China’s ByteDance Ltd., which runs TikTok, is valued at $140 billion by CB Insights. Japanese startups aren’t likely to challenge the global reach and valuations of the likes of Stripe Inc. or Spotify Technology SA anytime soon.

Startup founders in Japan often lack the cultural knowledge needed to compete in the west, while the size of the domestic market means they can become extremely wealthy without needing to tackle other markets. More late-stage finding from the likes of Son and other international investors could help the country take its next step.

“I really do think there’s going to be $10 billion outcomes in the startup market in Japan,” said Riney. He expects a decacorn, a private startup with a $10 billion valuation, to emerge in the next three to five years.

Most Read from Bloomberg Businessweek