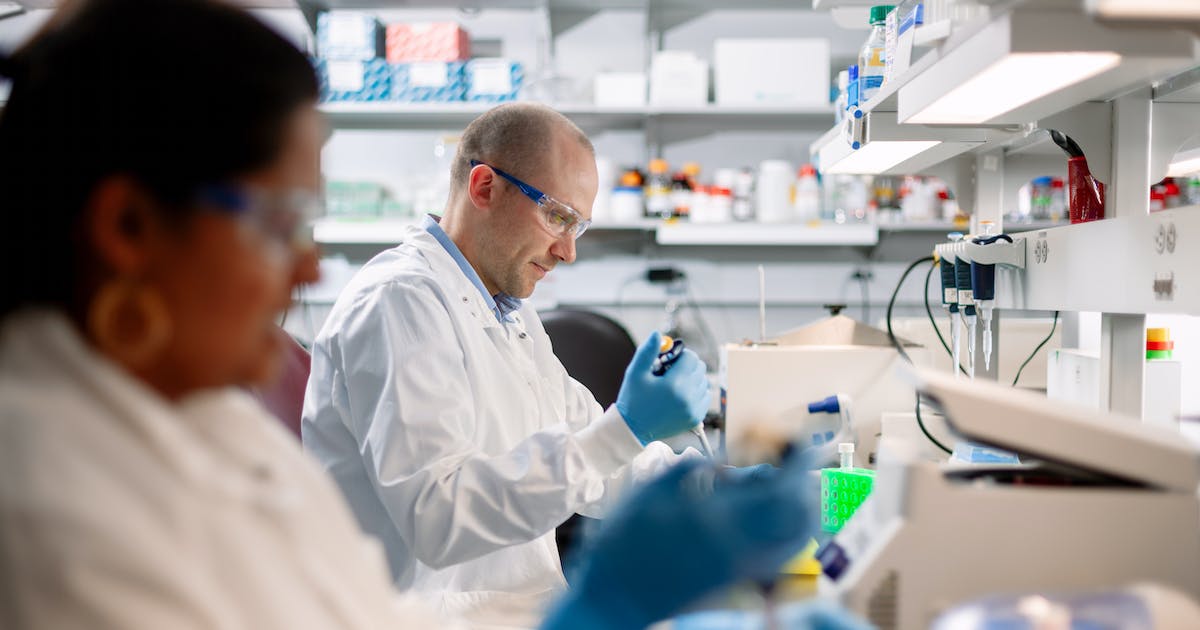 A Rochester-based startup with an origin story at Mayo Clinic is seeking new ways to use viruses to treat cancer, the second-leading cause of death in the United States.

Vyriad Inc. recently closed a financing round that brings its investor fundraising total to more than $100 million. Interest in the company’s prospects underscore there’s more than just medical devices in Minnesota’s medical industry — biotech and life sciences are growing categories.

“I’d put Vyriad up there as easily among the top couple of consequential biotech companies,” said Frank Jaskulke, vice president of intelligence for the Medical Alley trade group. “It’s a big deal for patients and it’s a big deal for creating more opportunities in Minnesota and in Rochester.”

“I think it’s got the potential to be a therapy for pretty much every type of cancer in the long run,” said Vyriad’s CEO, Dr. Stephen Russell.

Russell started exploring the idea while still a medical student at the University of Edinburgh in the U.K. He joined Mayo Clinic in 1998 to specifically focus on researching the potential for cancer-killing viruses. Vyriad was created as a standalone company in 2015, the result of two separate Mayo projects being merged.

“I got turned down for a couple of jobs because I used to go into interviews and they’d say ‘What do you want to do with your life?’ and I’d say, ‘I want to treat cancer with viruses,'” said Russell.

But these days Russell is being taken very seriously.

On Tuesday morning, the company plans to announce it has raised $29.5 million in a round led by Harry Stine of Iowa-based Stine Seed Farms. The new money brings the total amount raised for Vyriad’s Series B financing round to $60 million.

The unlikely partnership — a corn and soybean seed company backing a biotech startup — has more logic than one might first think, said Russell. Stine saw parallels between the two companies with one focused on seed genetics and the other using specialized viruses to target cancer, he said.

In 2019, Vyriad and New York-based Regeneron Pharmaceuticals announced a five-year collaboration agreement. The deal included an equity investment in Vyriad from Regeneron. It also calls for Regeneron to have an exclusive option for Regeneron to license Vyriad’s Voyager-V1 drug candidate.

Cancer is second only to heart disease as a leading cause of death in the U.S. In 2020, there were 602,350 cancer deaths, according to the Centers for Disease Control and Prevention.

Unlike chemotherapy, which involves numerous treatment sessions over several weeks, Russell envisions virus treatment as something that could be done once.

“We are focused on a single intravenous dose,” said Russell.

Russell expects that virus therapy would be used to complement other treatments. One of the more recent developments in cancer treatment is immunotherapy that uses biologic agents made from living organisms to treat cancer.

Vyriad is currently working with three potential viruses. Russell said the viruses can be engineered to make them highly specific for targeting particular cancers.

“We are really encouraged by both the early results of Vyriad’s [initial] clinical trials and by the substantial new investment in the company by Harry Stine,” said Harry Hoffman, co-manager of the Rochester-based Southeast Minnesota Capital Fund, which first backed Vyriad in 2018.

Hoffman, who is also on Vyriad’s board of directors, said it’s challenging to raise new capital in this market “when public biotech indices are mostly down 25 to 40 percent.”

“I would say in all honestly I think we’re probably five years away from an [FDA] approval,” said Russell. “It could be faster than that but that would be my realistic take.”