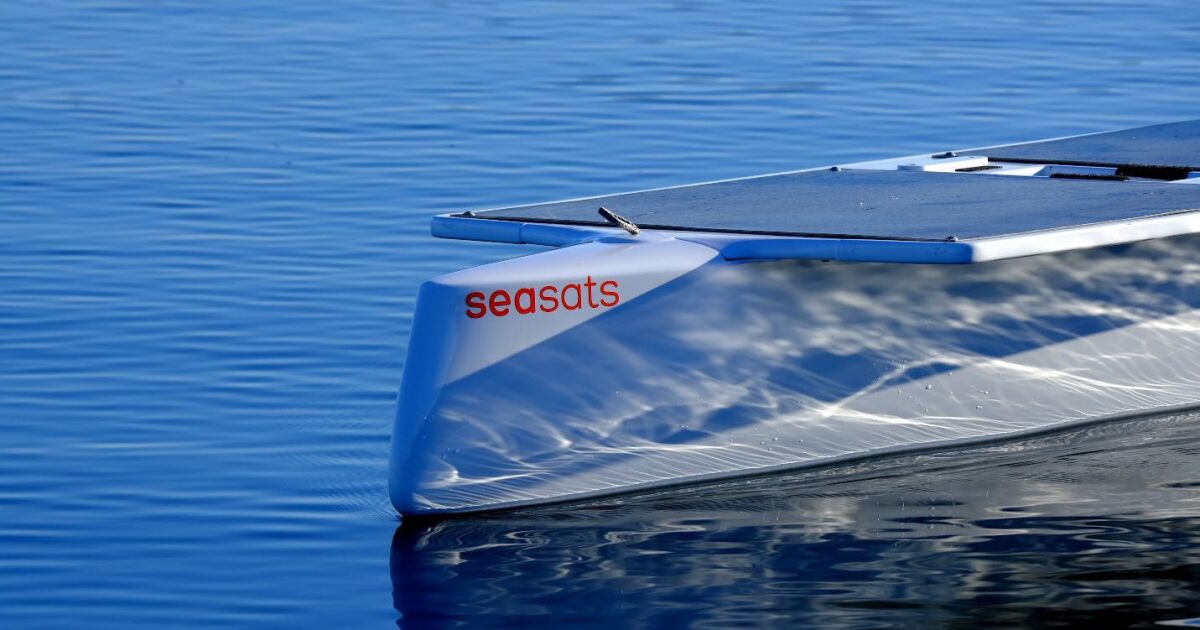 San Diego startup Seasats, a maker of affordable, solar powered autonomous surface vessels, has received roughly $10 million in a strategic investment from defense contractor L3Harris Technologies to jumpstart its flagship drone that’s sometimes referred to internally as “a sensor truck for the ocean.”

The 10-employee company, founded in 2020, has developed a relatively inexpensive, rugged drone that can stay out to sea for six months. About 10 feet long, the Seasats’ X3 has a low profile that’s difficult to detect by sight or radar — making it attractive for potential use in counter-piracy, mine clearing, surveillance, reconnaissance and electronic warfare, according to L3Harris.

“We are excited about partnering with L3Harris because obviously they are a big organization with a lot of capabilities and expertise,” said Seasats Chief Executive Mike Flanigan. “We bring almost on the opposite end of that spectrum — a really fast-moving, small group that is used to getting R & D projects done on tight timelines.”

“We are already collaborating on demonstrations for the Navy in the coming months, and are looking forward to helping Seasats accelerate production, deploy in new theaters, and advance technical capabilities through this partnership,” said Patrick O’Reilly, vice president in corporate strategy and development for L3Harris.

Seasats’ roots date back to a garage project in which a group of friends built an autonomous surface drone with the goal of sailing from Rhode Island to Spain. Launched in 2013, the drone traveled about 1,200 miles and garnered a sizable social media following before losing contact.

After working for other companies, the core group behind the garage project re-united two years ago to develop a durable, versatile and affordable autonomous vessel capable of hosting sensor payloads for projects such as mapping reefs, tracking underwater vegetation/algae blooms and monitoring offshore infrastructure.

Seasats previously raised $1 million from Techstars and angel investors in a pre-seed funding round. Last year, it participated in pilot missions with the Scripps Institution of Oceanography to probe water quality, as well as additional commercial projects around near-shore mapping and acoustic monitoring of sea mammals.

Government contracts followed. In August, Seasats received a Small Business Innovation Grant through the National Science Foundation focused on software needed for ocean drones to comply with international collision regulations. Last month it was invited to participate in the Navy’s Task Force 59, which is exploring artificial intelligence and unmanned technologies on the ocean.

“It is a pretty exciting market because it is in an upturn mode,” said Flanigan. “It has been around for a bit. The last five to 10 years have shown what is possible, and now it’s about can these applications actually be scaled and made more available to a wider set of customers. It changes the game when you can put a lot of vessels out there.”